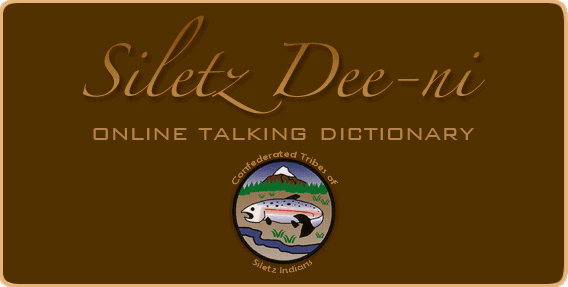 This weekend, the New York Times published an article about the extremely endangered Silitz Dee-ni language - an Athabaskan language spoken in the coastal Northwestern United States. It is striking that this is not a story of last-speaker language death - such stories are of course highly newsworthy, but also quite depressing from the vantage point of those working to preserve global linguistic diversity. Instead here is a story of linguistic and cultural restoration and revival, and the incredible efforts of a few people that are bringing it about. We are increasingly seeing such stories in mainstream media, and it is encouraging.

At the core of the Silitz Dee-ni language revitalization project is the creation of a now 10,000+ word dictionary, assembled over the course of many years, from materials and recordings created by tribal members as well as those compiled by linguists over the past century, now housed in many different language archives and university library special collections. Bud Lane, one of the main dictionary developers has recorded most of the 10,000 entries himself.

For several years, the dictionary database was maintained off-line and password protected so that only tribal members could access it. Recently, however, the project team decided to create an open online version - a "talking dictionary" - that has significantly raised the profile of the dictionary team's efforts, the language itself on a global stage, as well as highlighting the value the language has to the Silitz people.

You can explore the talking dictionary through its Silitz Dee-ni / English search interface. Some default searches produce some extensive results, some with pictures as well as sound - for example "basket" or "salmon" or a basic verb like "put" that illustrates the internal complexity of words that Athabaskan languages are famous for.

It is often said by lexicographers that a dictionary is never finished - this is partly because the task of compiling them is gargantuan, but also because a healthy language is always changing. Some words become obsolete, falling into disuse, while other novel words emerge as speakers name and talk about new entities in their world. For a language that has gone through a period of obsolescence, many new words need to be created to name and talk about the modern world. At this point, the Silitz appear to be focusing on compiling all of the vocabularies available to them, but with language expansion being a primary goal, one can imagine a future effort devoted to vocabulary creation.