Be sure to read the fine print! 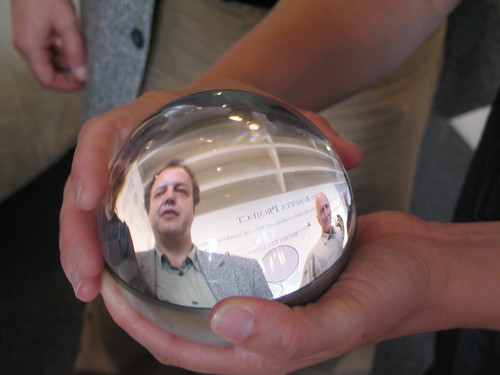 Yesterday at the Long Now Museum, board members, staff and guests raised a glass to celebrate the completion of the first version of the complete Rosetta Disk. Over eight years in development, the Disk is a physical, microscopic library of information on over 1,500 human languages. 14,000 text and image pages are etched into the surface of a 3'' diameter nickel disk, which can be read with approximately 750x (optical) magnification.

The nickel disk has a high resistance to corrosion, and can withstand temperatures of up to 300 oC with little to no change in legibility of the text. Kept in its protective sphere to avoid scratches, it could easily last and be read 2,000 years into the future!

Joining in the celebration was Oliver Wilke, proud owner of a new Rosetta Disk (shown reflected in the Rosetta sphere on the left, above). The disk will be a centerpiece for his new foundation in support of endangered and minority languages around the world.

So... if the Rosetta Disk is a prototype and facet of the Library of Ages (companion to the 10,000 Year Clock), what goes into the fine print next?

Check out our pictures of the event on Flickr

Also this article on the Rosetta Disk launch event in the San Francisco Chronicle, August 20, 02008