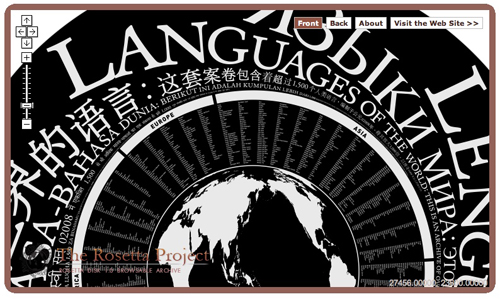 A fully browseable version of the Rosetta Disk is now available on DVD from The Long Now store ($15).

The viewer on the DVD is powered by the OpenLayers 2.5 map visualization framework, which allows you to zoom all the way in to read even the microscopic text on both the front and back of the disk. The front side (shown here) is an index listing the 1,500 languages on the disk, and the back contains over 13,000 pages of text with documentation on those languages. Together, both sides of the disk store a collection of information that attests to a richness of our human cultural and linguistic diversity in the 21st century.

One of the principles of archiving is to make and distribute multiple copies of information. This principle goes by the moniker LOCKSS 'Lots of Copies Keeps Stuff Safe' -- if some copies go missing, others will hopefully survive. And the more copies out there, the better the chance of some surviving. Now, by owning a copy of The Rosetta Disk DVD, you can take part in helping preserve this information for the future.

An archive of the world's languages makes a great holiday gift! Proceeds from the sale of the DVD go to support continued work on The Rosetta Project.