Don't Sleep, There Are Snakes

If Indiana Jones had been created by Gabriel Garcia Marquez and Stephen Pinker instead of Lucas and Spielberg, he might have been something like Daniel Everett. His story is as visceral as it is intellectual - it's got love, beauty, pain and suffering in the South American jungle and a high-stakes search to understand the cognitive underpinnings of human language. 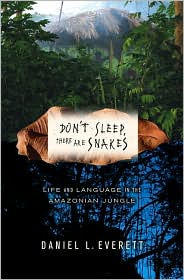 Everett has simultaneously produced a ground-breaking linguistic anthropology text and a riveting, powerful memoir about life lessons learned on missionary work in the Amazon. Don't Sleep, There are Snakes: Life and Language in the Amazonian Jungle was released on November 11th and he'll be presenting "Endangered Languages, Lost Knowledge and the Future" as one of our Seminars About Long-term Thinking on March 20th, 02009.

Daniel Everett lived for 7 years throughout 3 decades among an isolated Amazonian tribe called the Pirahã, initially in order to convert them to Christianity. These unique people speak a language that defies long-standing theories and live a simple, hard life as hunter-gatherers. His time among them caused Everett to renounce both Christian faith and some of the basic tenets of modern linguistic theory.

Don't Sleep, There are Snakes includes Everett's descriptions of the overwhelming beauty of the jungle (something he couldn't help but notice even while desperately canoeing his entire family up an unfamiliar stretch of river to save his wife and daughter from malaria), harrowing life-or-death struggles (see above), and thoughts on the implications of a people that speak without embedded clauses or a perfect tense (things, demonstrated by this sentence, I obviously can't live without).

The book has been reviewed by Time and the London Times. A New Yorker article about Everett's work has been discussed here previously. And if you're wondering about the title, it comes from the Pirahã's lack of small-talk such as 'Hello' or 'How are you?': Instead of wishing someone 'Goodnight,' they offer a pragmatic reminder of the omnipresent dangers of jungle life.

Buy the book from Amazon through Long Now's Store page and Long Now gets 15%.