Adivasi Academy students work to save indigenous languages of India 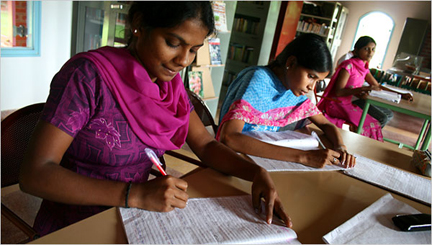 In a remote region of India, students at the Adivasi Academy are working to save their tribal languages, and through their languages, their tribal cultures and knowledge as well. They certainly have their work cut out for them -- many of the students have had to devise writing systems for their historically unwritten native tongues only to embark on the herculean task of developing dictionaries, grammars and other major reference works (consider that Noah Webster's dictionary was the product of decades of work -- and a dictionary is but one part of these students' undertaking.)

The term adivasi refers to the indigenous people of India, who belong to remote tribal groups and speak many different dialects. These languages are rapidly being engulfed by urban languages with greater economic utility and prestige. One student, Kantilal Mahala, a speaker of the Kunkna [Konkani] language remarked, “In my village, people who move ahead speak only Gujarati. They feel ashamed of our language." But documentation projects like these can help change perceptions, raising the prestige of the language and its speakers through a new written standard and medium for wider communication -- this, and the fact of the Academy's very existence, which affirms 'we are here, and we are worth this effort.'