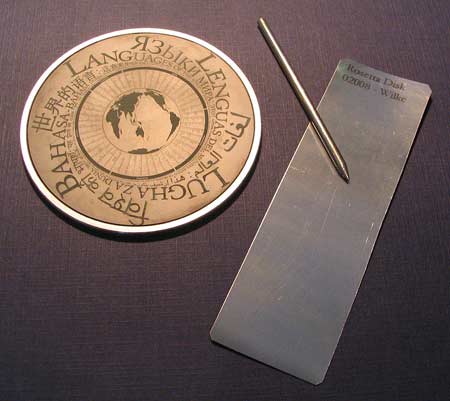 The final technical hurdle of the Rosetta Disk Project has finally been overcome. (See Kevin Kelly's write up of this project here) We are distributing three of the disks to their owners this month and have two remaining of this first edition.

We now have both the sides of the disk micro-etched. The front human eye readable side (pictured above) was a challenge as it had etching that went from very large to the very small. The eight outer spiraling texts start with characters about a centimeter high and end up with characters a few hundred microns high. And the language names surrounding the earth image were small enough we had to get a special engravers style font made in Germany to make sure they would stay legible. This side of the disk was etched into commercially pure titanium that was coated with a black oxide coating. This coating was then etched through with an eximer laser by a micro-etching company Norsam Technologies. One of their challenges was etching the center of the letters as well as the outlines. They had to create a crosshatching pattern for the 10 micron wide eximer beam to pass back and forth over the fill areas. Each one takes over 36 hours to etch.

Each of these are mated up with the other micro etched side of the disk with over 13,000 pages of language translations in a stainless bezel. (see below) 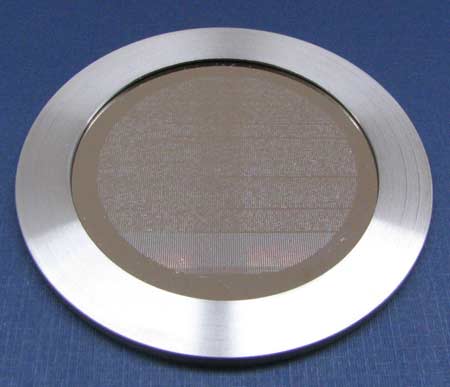 Each of the five first edition disks are going to still two of these remaining for any donor Rosetta Project donors of at least $25,000 (Contact Laura if interested in future editions). They each come in a protective stainless and glass spherical protective case. We are now working on more economical versions that we can more widely distribute. We have already produced a DVD version with all the content and a Java based viewer to view it in a kind of "virtual magnifying" glass format. When you open the case and lift out the disk, there is a space underneath which holds a strip of stainless and a stylus to allow each generation who owns that Rosetta disk to mark down their ownership (pictured at the top of this post).

It took us eight years to get to this point. Whew.