Wired magazine has a very good piece this month on what many are calling the American Stonehenge, (though it's not the only site to receive this moniker). 90 miles east of Atlanta lies a mysterious and controversial monument known as the Georgia Guidestones. 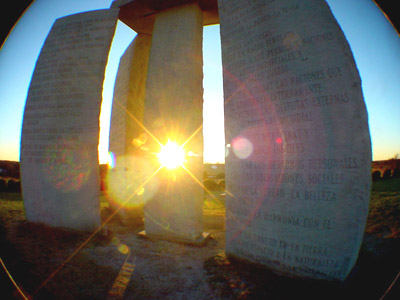 In a field north of a small town called Elberton, four 16-foot tall granite slabs stand aligned to the cardinal directions. They are centered around a central pillar with a fifth piece of granite resting on top. The full monument is almost 20 feet tall and weighs over 100 tons. Constructing the monument was no easy feat, even for the experienced granite workers of Elbert County, which calls itself "The Granite Capital of the World."

In the central column, a hole is drilled that aligns with the North Star (for now, anway). It also contains a slot that allows viewers to see the Sun's position as it sets on the equinoxes and solstices. An opening in the capstone create a beam of sunlight that shines onto the central pillar at noon and indicates the day of the year.

The Guidestones were erected in 1980 with the direction of a man operating (and funding the pricey project) under the pseudonym R. C. Christian. While their purpose isn't exactly clear, a tablet set into the ground nearby proclaims,

Let these be guidestones to an Age of Reason.

The Guidestones are covered in inscriptions written in 8 major languages that describe the tenets of their imagined Age of Reason. They seem to be a prescription for a utopia, albeit, one with limited access - the first tenet reads,

MAINTAIN HUMANITY UNDER 500,000,000 IN PERPETUAL BALANCE WITH NATURE

These tenets (some are calling them commandments) line up pretty closely with what many conspiracy theorists, especially those with a religious bent, imagine to be the plot of either the Antichrist or the New World Order. Searching online about the Guidestones turns up more conspiracy theory pages than fansites:

The message of the American Stonehenge also foreshadowed the current drive for Sustainable Development. Any time you hear the phrase "Sustainable Development" used, you should substitute the term "socialism" to be able to understand what is intended...Certainly the group that commissioned the Georgia Guidestones is one of many similar groups working together toward a New World Order, a new world economic system, and a new world spirituality. Behind those groups, however, are dark spiritual forces.

The Guidestones were vandalized last winter and, though nobody has yet marshaled the resources to actually do it, calls for their destruction are not uncommon. Thus far, Elbert County appreciates the controversy's effect as a tourist draw and probably appreciates the way it highlights their granite industry.

As for the Guidestones' likelihood to survive, it is interesting to note that the surrounding mystery has been both a help and a hindrance. By instilling wonder and encouraging curiosity, the secretive creators have generated a good deal of interest in the monument. They've also, however, allowed some blanks to be filled by people offended by the little that is discernible about their agenda.