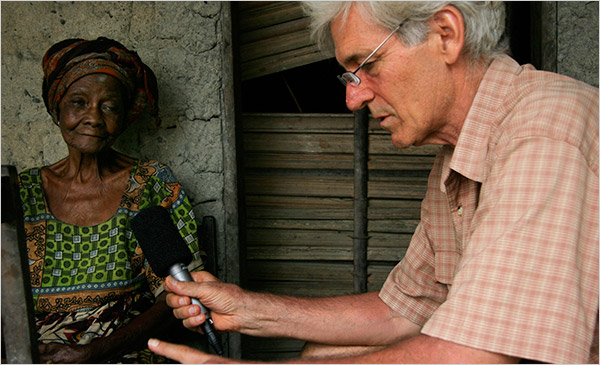 A recent article in the New York Times describes the endangered language research of Tucker Childs, a linguist at Portland State University, who is in Sierra Leone studying the nearly extinct Kim language. The death of the Kim language is attributed to the decision of younger speakers to learn the Mende language, spoken by 1.5 million people in Sierra Leone and Liberia. This pattern of language loss is common, especially in the era of globalization, when the ability to communicate beyond a local village is essential for economic success.

The article suggests that Kim is beyond the point of revitalization, but this makes the effort to document the language even more urgent. By documenting the Kim language, and then depositing the documentation with the Hans Rausing Endangered Languages Project, Childs and his research team are working to make sure that knowledge of the Kim language will remain long after the language is no longer spoken. This kind of information can contribute a great deal to ongoing linguistic research (such as the study of linguistic typology and what is possible in human language) and in some cases, has even provided enough information to bring languages back into active use after generations have passed.

Technology for gathering language documentation has changed dramatically, just as language documentation efforts have redoubled in the face of rapid and massive language extinction. Audio and video recorders are all digital, and the work of building dictionaries and translating collected texts is now typically done on a laptop computer. One of the most moving parts of The Linguists, a documentary chronicling the work of two endangered language researchers (viewable for free on Babelgum), comes when the last speakers of Chulym, a language of Siberia, are able to immediately see a digital video recording of themselves speaking their native language, which was heavily supressed in the Soviet era.

While digital technology provides new tools in the effort to document the world's endangered languages, it also presents a challenge for archivists trying to preserve data that is "born digital" and only exists in a digital format. The Digital Endangered Languages and Musics Archive Network (DELAMAN), is a network of digital archives that support endangered language documentation by helping ensure that data remains safe, discoverable, accessible, and usable. Participating archives like The Rosetta Project are working to develop and promote robust archival practices around the long-term storage of linguistic data. Similar efforts have produced and promoted ISO 639-3 codes for 6,800 human languages, linguistics-specific metadata (see the Open Language Archives Community), and are promoting open and transparent file format standards for linguistic research (see the NSF-funded EMELD project)