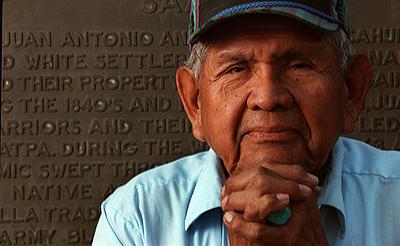 With the passing of Cahuilla elder Alvino Siva on June 26, the language of the Cahuilla of Southern California moved one step closer to being lost forever. Silva was one of just a handful of fluent Cahuilla speakers left. A 1994 estimate placed the total number of speakers between 7 and 20, all elderly. Cahuilla is one of the 516 languages listed by the Ethnologue as critically endangered, and linguists estimate that we may lose as much as 90% of the world's 6,800 languages in the next century -- an average of one human language per week.

Siva was especially interested in teaching and preserving Cahuilla bird songs, which tell the origins and history of the Cahuilla people. The debut of the documentary "Sing Birds: Following the Path of Cahuilla Power," at Idyllwild Arts Academy, chronicles this rich oral history. Siva's interviews, along with those of two other Cahuilla elders, feature prominently in the film.

The Rosetta Project Archive houses more than 30 Cahuilla recordings, assembled in the fall of 1937 by John P. Harrington, some of which include performances of bird songs (available in this Google Earth Layer). During 40 years as a field ethnologist for the Smithsonian, Harrington collected recordings of languages throughout California and the Americas, including Cahuilla. The original wax cylinder and aluminum disk recordings are now kept at the National Anthropological Archives in the Smithsonian. The Rosetta Project Archive also includes a Cahuilla grammar and set of texts that you can find in our special collection in the Internet Archive.