Putting the World's Languages on the Map

Estimates of the number of the world's languages are hard to nail down precisely. Our best estimate comes from the current edition of the Ethnologue, which puts the number at 6,909... 6,909 languages. For a challenge, try naming a hundred. Fifty. Ten? The notion of living in a world with almost 7,000 languages is an abstraction for nearly everybody.

One way to potentially visualize this is by locating languages on the map. This may seem like a simple task, but the complexities become apparent when looking even at a single language such as English. Besides native speakers, there are many non-native speakers of English, who learn it as way to communicate with people around the world. How do you map these speakers? How do you show that English is spoken alongside many other languages, such as the many indigenous languages of North America and Australia? The complexity of language use calls for an approach to mapping that is more than placing a single point on a country, or even drawing geographic boundaries. A good map of the world's languages must account for the many ways in which we interact with language in our daily lives. 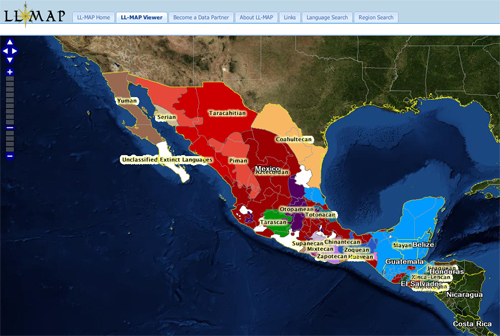 One attempt is LL-Map, shown here. This project, funded by the National Science Foundation, is working to integrate many different geo-linguistic factors into a single digital map interface. To date, this interface provides many different language map layers, combined with geographic data related to climate, political divisions, and flora and fauna, both historical and current. By integrating these layers, LL-Map provides a tool for those who hope to better understand and study the complex factors of language use worldwide.