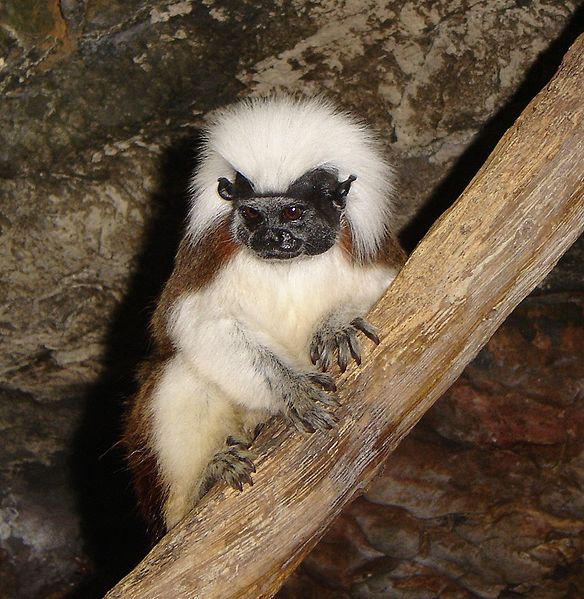 This recent study has found that monkeys are able to discern the prefixes and suffixes of human language. These word parts are essential to the grammars of many languages -- including English, where verbs are changed by the addition of suffixes to mark things like tense, aspect, person and number (hear-d, hear-s, hear-ing, etc.).

In the study, Cottontop Tamarin monkeys (pictured on the left) were made to listen to human speakers modifying a fictitious word base "shoy". The monkeys would grow accustomed to hearing a phrase such as "shoy-bi," where "bi" functions as a suffix. When the monkeys heard "bi-shoy" -- turning "bi" into a prefix -- they reacted by turning to the researcher playing the recording, indicating they were aware of the inconsistency in the sound pattern. What's more, the monkeys were able to recognize the change after hearing a single phrase only a few times.

Lead Author Ansgar Endress, a researcher at Harvard University, sees a parallel in the way human babies learn the rules of affixation in a language by tracking the position of speech sounds in relation to one another. By identifying this cognitive function in other animals, he suggests that the ability to comprehend and categorize affixation, a key mechanism driving human language, may have evolved for a non-linguistic purpose.

(By the way, we here at The Rosetta Project aren't really worried about having our jobs outsourced to other primates, since they haven't been shown to be able to parse infixes, circumfixes, much less nonconcatenative morphology. And they can't type very well. Now, being replaced by machines... this has us a little worried!)