Director of the Bibliotheca Alexandrina at Stanford Next Month 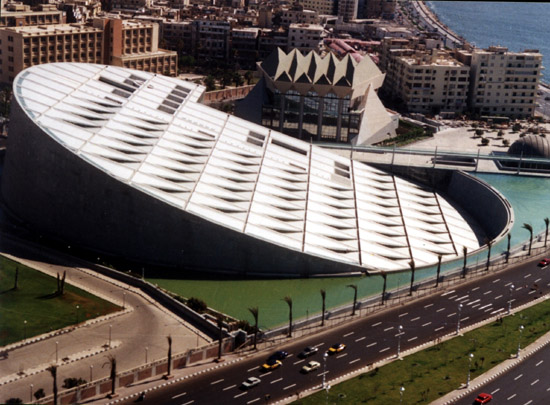 Officially inaugurated in 02002, the Bibliotheca Alexandrina is an attempt by Egypt and the city of Alexandria to recreate, in spirit if not content, the original Library of Alexandria. The Ptolemaic dynasty of Egypt created what was at the time, the worlds largest library in the third century BC in the Egyptian city of Alexandria. Though historical accounts disagree as to how, why and when, this massive repository of centuries of scholastic work was burned down and lost to the ages.

Long Now Board Member Michael Keller sent in notice of his event coming up at Stanford University on December 2nd in which Dr. Ismail Serageldin will be discussing his work as the Director of the Bibliotheca Alexandrina and his hopes for better dialogue between the West and the Muslim world:

Stanford University Libraries is pleased to present two lectures by Dr. Ismail Serageldin.
At 2:00 pm: The New Library of Alexandria: A Beacon of Knowledge
At 4:30 pm: For a Better Dialog Between the West and Muslims
Refreshments will be provided after the second lecture.

The lectures are being held in the Dinkelspiel Auditorium. Call 650-736-9538 or email sonialee@stanford.edu for details/reservations.

Of Note: The Bibliotheca Alexandrina has a complete copy and physical backup of the Internet Archive.