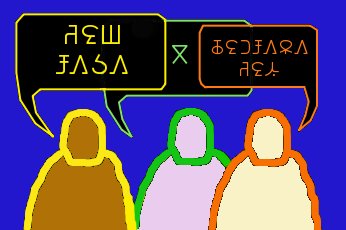 The New York Times ran an article today about endangered languages spoken within the New York City immigrant population - by some estimates as many as 800 languages are represented:

"In addition to dozens of Native American languages, vulnerable foreign languages that researchers say are spoken in New York include Aramaic, Chaldic and Mandaic from the Semitic family; Bukhari (a Bukharian Jewish language, which has more speakers in Queens than in Uzbekistan or Tajikistan); Chamorro (from the Mariana Islands); Irish Gaelic; Kashubian (from Poland); indigenous Mexican languages; Pennsylvania Dutch; Rhaeto-Romanic (spoken in Switzerland); Romany (from the Balkans); and Yiddish."

The article designates New York City as "the most linguistically diverse city in the world." I don't know if that is in fact true, but it seems likely.

For the United States, there is data compiled by the US Census on language use - since 1980, the long form of the census has asked several questions about language use - Does this person speak a language other than English at home? If so, what is this language (fill in the blank)? How well does this person speak English (very well, well, not well, not at all)? Since the long form is distributed to one in ten households, the smaller the group the less accurate the count tends to be. Still, the numbers give some idea, and it is always interesting to see what languages get listed.

To make better use of the wealth of linguistic diversity in their own backyard, Daniel Kaufman and colleagues at The City University of New York have started the independent Endangered Language Alliance - "an urban initiative for endangered language research and conservation." This is, in fact, a time honored tradition among linguistic graduate students and faculty who lack time or resources to travel. But judging by the numbers of speakers of small languages in large cities, and the rapid loss of small languages around the world, this kind of program is just plain smart. Having more of them in urban locales - or maybe existing programs like StoryCorps - could use "diaspora sourcing" [1] to make a big impact in the documentation and revitalization of endangered languages.

[1] The term diaspora sourcing was coined, I believe, by Michael Smolens of dotSUB and used in his proposal with Lance Knobel: "Digital Storehouse of Knowledge for the world’s bottom billion: Using 'Diaspora Sourcing' and cutting-edge digital tools to allow the millions who left to give back and help maintain their culture" (November, 02009).