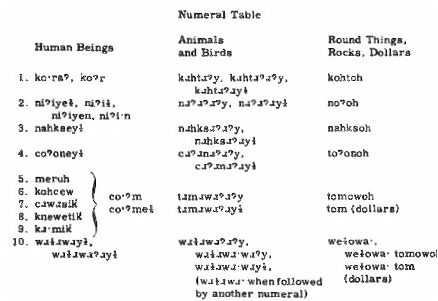 Description of Yurok numerals in the Rosetta archive

Yurok (YUR) is the language of the Yurok people of northwestern California. As with most indigenous American languages, European contact has mostly come to replace Yurok with English, so that as of 2009 it is near extinction. Yurok belongs to the Algonquian language family, most of whose other members are geographically distant from Yurok. Accordingly, Yurok is surrounded by languages unrelated to it, except for the only distantly related (and extinct) Wiyot.

Yurok has a set of glottalized consonants (sounds produced with the glottis closed, as if holding your breath) that contrast with their nonglottalized counterparts. The glottalized sounds are less common but are important in Yurok morphology, such as verb conjugations.

Some verbs must inflect (be conjugated) for person and number, others cannot, and many can go either way. For example, the word for eating must take different endings according to the subject: nepek’ for ‘I eat,’ nepe’m for ‘you (singular) eat,’ nep’ for ‘s/he eats,’ nepoh for ‘we eat,’ nepu’ for ‘you (plural) eat,’ and nepehl for ‘they eat.' On the other hand, chek ‘sit,’ always maintains the same form no matter who and how many are sitting. Finally, skewok ‘want’ can remain skewok for all subjects, or it can inflect as skewoksimek’ ‘I want,’ skewoksime’m ‘you (singular) want,’ skewoksi’m ‘s/he wants,’ etc., just as the verb ‘eat’ does.

Yurok has no distinct category of adjectives; the words that translate to adjectives or express adjective-like meanings behave like verbs in terms of word order and inflection. For example, there is a word for being big that inflects just as verbs do: peloyek’ ‘I am big,’ peloye’m ‘you are big,’ pelo’y ‘s/he is big,’ etc. Numerals are also a type of verb, and they have different forms according to the type or shape of thing being enumerated (for example, humans versus animals, or flat things versus tufted things).

Ways of writing Yurok have varied over time and remain not entirely settled. In the 1980s the Yurok Language Committee adopted UNIFON, designed (by an economist) as an English pronunciation key. However, UNIFON was impractical and therefore unpopular, and the Yurok Language Committee adopted an alternative system, which was later revised by linguists working on the language (as Leanne Hinton details in her unpublished 2010 article "Orthography Wars"). The Berkeley Yurok Language Project, a searchable collection of Yurok stories, words, and morphemes, lists entries in both the original alternative system and the revised system.