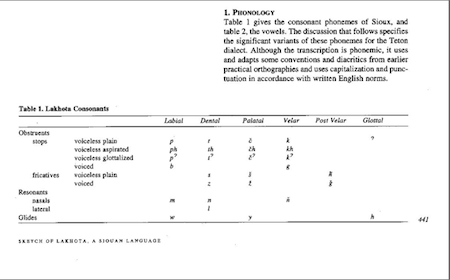 Lakota [1], the language of the Lakota tribe of the Great Plains, is fading before its speakers' eyes. Although Lakota is one of the most robust Native American languages today, its speaker population has fallen far since its peak in pre-colonial times and continues to dwindle. This reflects the experience of many native tribes, and is largely a result of US government policies concerning these peoples. Lakota speakers (the Ethnologue puts their number around 6,300) are left in danger of losing not only their language but the vital cultural information it holds.

Lakota, like most of the world's languages, was not originally written, and much of the long tradition and history of the Lakota exists only orally in their stories and ceremonies. The Lakota people did, however, keep detailed historical records, as can be seen in the "Lakota Winter Counts," now archived online on the website of the Smithsonian National Anthropological Archives. These are pictographic calendars detailing important historical events in the lives of the Lakota.

An alphabetic writing system for the Lakota language in use for the past four decades has now been widely adopted by Lakota speakers. And, in a modern effort to revitalize the Lakota language, the Lakota Language Consortium has compiled textbooks from introductory to college level and an expansive online forum to assist children and adults in learning and thereby preserving the language.

They have also compiled a 20,000-word dictionary of Lakota, including wonderfully complex words like "woímnayankel," which expresses the humbled yet connected feeling one experienced when witnessing something particularly majestic in nature, such as the aurora borealis. Lakota words are often this complex, efficiently expressing ideas that would take a sentences or two in English. Efforts like the Lakota Language Consortium allow the Lakota language to not only survive but flourish, giving future generations the chance to embody and spread the culture of their ancestors.

The Rosetta Project's collection on the Internet Archive has records of the Lakota language in the form of three text excerpts: a description of where Lakota was historically spoken; a phonology, which uses a chart to characterize phonemes by linguistic traits; and an orthography, or explanation of the Lakota writing system.

[1] The Lakota were historically known as the Sioux, but this is an exonym from their Algonquian neighbors to the east, and the term is deprecated today.