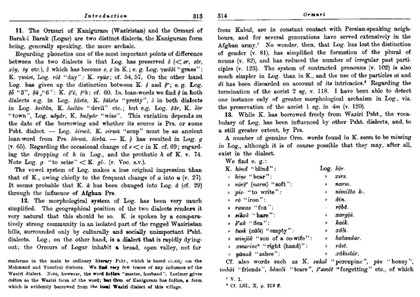 "Language is identity," Darfur refugee Daowd I. Salih told the New York Times about a week ago. He was being interviewed for an article called "Listening to (and Saving) the World's Languages." As mentioned in this Rosetta Project blog post, the article discusses the amazing variety of spoken languages in New York City, and what residents are doing (or not doing) to preserve their native language.

One of the languages the article touches on is Ormuri, a language of multiple dialects spoken in small regions of Afghanistan and Pakistan. According to the Ethnologue, Ormuri has only about 1,050 speakers. The New York Times article reveals a plan to canvass New York City for speakers of Ormuri in order to learn more about the language and the cultural information it holds.

Languages with small speaker populations are quickly dying out, and the data they contain (whether it be linguistic, historical, or cultural) is important enough to merit a concerted effort at saving them. Ormuri is a perfect example, especially in the political and economic environment of our time (read: the complex tangle that is our current Middle Eastern relations). The Rosetta Project's database in the Internet Archive contains a detailed description of Ormuri, including a history of its speakers: where they came from, who their ancestors are, and how their language has co-evolved with those around it to become what it is today.

In my mind there is nothing that illustrates a culture's unity so much as its language. It allows people to build social relationships, conduct business transactions, and express to fellow humans everything they hold dear. What's more, as any good anthropologist knows, learning the language of a culture is one of the most important steps an outsider can take to gain the trust and respect of its people.

What does this have to do with an obscure Afghan language, or with Darfur refugees? Only this: if we intend to successfully navigate the conflicts of the modern global world, it is absolutely necessary to understand and relate to the people with whom we intend to work. The Middle East in particular, Afghanistan being an illustrative example, is culturally very foreign to the West; its people have lived for centuries in small, autonomous groups that hold to varied, often contradictory beliefs. The fact that so many of these groups have their own language, like Ormuri, is telling of their relative isolation, and gives clues to how they live their lives.

Rosetta's description of Ormuri tells the story of its peoples' interactions through Ormuri's morphology. By studying the languages Ormuri had contact with and how these influenced its words, we can begin to create a web of social and economic interaction that would show the connections and dissociations between groups in the area. For example, Ormuri has many morphological similarities to Pashto, a common language in the region of Waziristan where Ormuri is spoken. Ormuri pronouns are strikingly similar to their Pashto equivalents, and many scattered words share similarities, like "wife," "glitter," and "to sit down." Pashto has also phonetically influenced Ormuri, replacing some traditional Ormuri allophones with similar Pashto ones.

Ormuri has also sustained contact with Persian, which is evident in many morphological changes that mimic the latter: loss of gendered nouns, simplification of plural nouns, and reduction of irregular past participles. Analyzing this data led the author, Georg Morgenstierne, to doubt the previous belief that Ormuri speakers descend from Kurds, and provided evidence for further theoretical investigations.

The very existence of this kind of knowledge is what Rosetta is all about; by preserving minority languages and stressing their importance, we hope to contribute vital insights into the lives of their speakers, insights that can be put to good use in surprising places. After all, you never know who you'll meet on the New York City subway.

[A note of introduction: this is my first post as an intern with the Rosetta Project. I will be working with Rosetta for three months, building the collection in the Internet Archive and continuing to spotlight Rosetta material on this blog.]