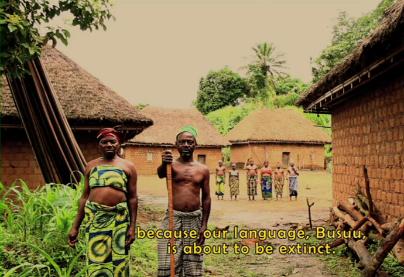 Busuu, a language of Cameroon, is reported to have only eight speakers left in the world. Speakers of Busuu have nearly all shifted to using another local language Jukun, which has about 2,500 speakers. Jukun and Busuu are related, but are only partially intelligible with each other. Jukun is used by Busuu speakers for almost all purposes, Busuu generally being reserved for use only at Busuu reunions, and only by adults - no children are learning the language. For all intents and purposes, Busuu appears to be a lost cause, destined to disappear from use with the passing of its current generation of speakers.

Yet despite this (or perhaps because of this) it has been adopted as a cause by the eponymous language learning website busuu.com, and awareness of the language’s plight is being spread through the medium of a professionally-produced video with a catchy song featuring the few remaining (but all apparently charming and good-humored) Busuu speakers. The Busuu.com website encourages people to spread awareness about Busuu through Facebook, Twitter and e-cards by sending recorded greetings from each of the remaining speakers. A clever and unusual tactic in raising the profile of an endangered language - but is increased awareness among online social networks likely to translate into increased use within the Busuu heritage speech community?

There are in fact a few notable cases where languages in rapid decline have been reversed, and threatened languages have significantly expanded in use and numbers of speakers - among these are Catalan, and Welsh and Hawaiian. For languages that have only a few remaining speakers like Busuu, Leanne Hinton, a linguist who works with critically endangered languages of Native California in the United States, has devised a technique whereby speakers and learners can create their own immersion environments for language learning. [1] These speakers then teach others the language, including their children. In this way a language can be passed along on a very localized level to a new generation.

To bring a language back into more widespread – even national – use, the key factor is support from every direction possible – top down from the government; bottom up from local communities. [2] Everyone needs to be invested, from governor to grandma, and real world-benefits to potential speakers is key. [3] So if this effort by busuu.com to raise social awareness is effective, and generates broad recognition for the Busuu speech community, the resulting increase of local prestige for the Busuu Language could be significant indeed.

We're certainly willing to give it a try - Busuu Busuu!

The author of this post, Harry Willoughby, is a 02011 summer intern with the Rosetta Project. He recently graduated from the University of Wales with a degree in Linguistics.