The September 02011 issue of the journal Language included an article entitled “A Cross-Language Perspective on Speech Information Rate,” by a team of linguists working with the University of Lyon and the French National Center for Scientific Research. Like many linguistic studies, this one investigates the parameters of human language and seeks to identify commonalities that hold true across languages. Given, however, that universal grammatical rules have proven more difficult to define than linguists might have hoped, this study was designed to test the universality of a different factor - time. 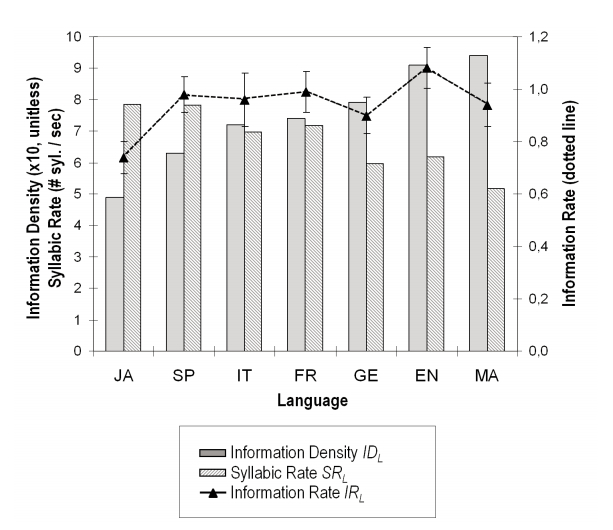 The authors hypothesize that “a trade-off is operating between a syllable-based average information density and the rate of transmission of syllables in human communication.” Basically, a language that is spoken quickly - in terms of syllables per second - uses more syllables than one that is spoken slowly in order to say the same thing.

To test their hypothesis they analyzed audio recordings of native speakers of seven different languages reading brief texts written in various styles. There were twenty texts, each composed in English and translated into the other languages. The authors compared the number of syllables that each language used in a given text, as well as the amount of time taken by speakers of different languages to actually say the entire texts. And indeed, they found that for the most part the languages whose texts used more syllables were spoken faster, and vice versa, resulting in equivalent rates of information output. Two complementary strategies for encoding and transmitting ideas.

"One has to consider the [...] loose hypothesis that [the information rate of the language] varies within a range of values that guarantee efficient communication, fast enough to convey useful information and slow enough to limit the communication cost (in its articulatory, perceptual, and cognitive dimensions)."

The premise here is that each translation of each of the texts communicates all of the information communicated in each other translation, adding and subtracting nothing, simply encoding the information according to the rules of each language. It would be interesting to discuss this premise with respect to the notion of linguistic relativity, which argues that your native language actually influences the way you perceive reality. Or in terms of issues such as evidentials or honorifics, which can require that certain information - and therefore more syllables - be included in a statement which in another language might be superfluous. Further research might also be able to analyze across more language families. The seven languages used in this study were English, German, French, Spanish, Italian, Mandarin Chinese and Japanese.

The authors also noted that the syllables themselves in quickly spoken languages are on average less complex, in that they are composed of fewer sounds (i.e. ‘law’ vs. ‘claw’ - both one syllable, but with different numbers of phonemes). As an initial investigation into the speed with which people communicate through speech, this is a fascinating study.

It seems that humans may be naturally and universally self-regulating when it comes to communicating through speech. There is a balance that cannot be disturbed: fast syllables are not allowed to carry too much meaning, and syllables with lots of information must be spoken slowly.