The Transcribe Bushman project was recently developed by Ngoni Munyaradzi, a master's student at the University of Cape Town's Computer Science Department. The goal is to transcribe the large number of manuscripts of |xam and !kun language documentation in the Bleek and Lloyd Collection.

To get through the laborious transcription process sooner rather than later, Ngoni Munyaradzi has developed an elegant interface where anyone can log in and help. One of the most impressive aspects of the interface is his elegant system for entering complex characters needed to capture some of the most complex phonetics found anywhere in human language: 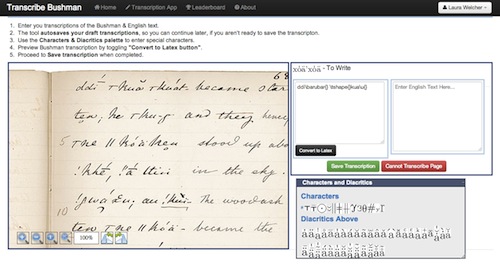 As Khoisan languages, |xam and !kun are famous for having clicks as consonant sounds, several of which are written with unique symbols not used in other writing systems. They also have several tones, as well as many secondary articulations for both the manner of articulating vowels as well as their voice quality - collectively these are represented by multiple diacritics both above and below vowels.

If you'd like to give it a try, the project could use your help. There is a tutorial video to watch first, and then you can jump right into transcribing. You can do just a single page, or as many as you wish.