The Cromarty Dialect: What Can We Learn From the Death of a Language Variety?

This month the world’s linguistic diversity took another high-profile hit with the loss of the dialect Cromarty. Bobby Hogg, the last native speaker, passed away in early October and was mourned internationally, along with his unique linguistic knowledge. Starting in the 01950s, the traditional fishing methods of the remote village of Cromarty began to be replaced and industrialized. In turn, the formerly strong bond between the village’s cultural, economic and linguistic identities started to erode. By 02011 Bobby was the only remaining speaker of the dialect. He and his brother can be heard speaking Cromarty in these recordings hosted by the Highlands cultural archive Am Baile.

Cromarty was a dialect of Modern Scots; a language with numerous spoken varieties, mostly found in the Scottish lowlands, with a total of around 200,000 speakers. Despite being part of the same linguistic family, the dialects of Modern Scots differ from each other so greatly that they often lack mutual intelligibility. For instance, a speaker of Northern Scots, although only separated by a few hundred miles, may not understand or be understood by a speaker of Southern Scots. The highly distinctive nature of Scots dialects means that each variety, such as Cromarty, is a crucial element in the unique linguistic landscape of Scotland. 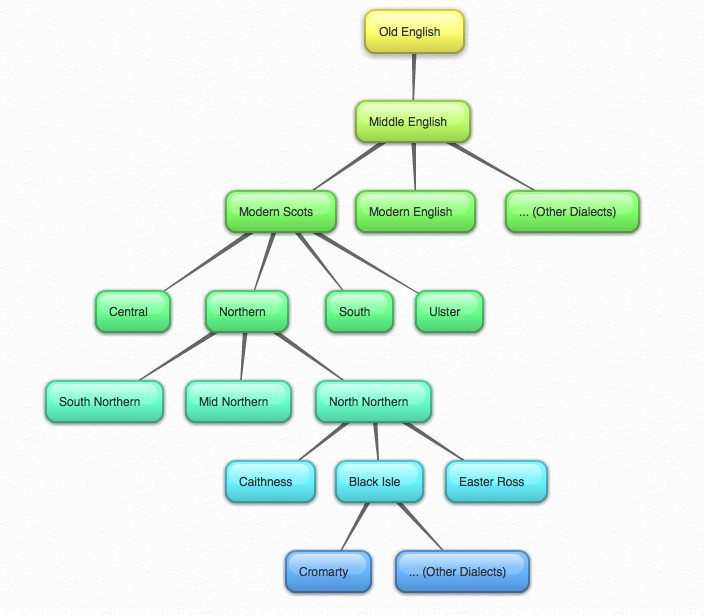 The loss of Cromarty is undoubtedly both significant and tragic, but it is essential to recognize that even in death, languages and dialects leave us with more than cause for lamentation. Perhaps most notably, the death of Cromarty tells us a great deal about the role of culture and community in the complex phenomenon of language loss. With its origins in a traditional fishing village, the dialect was highly specialized for talking about particular nautical techniques and equipment but simultaneously vulnerable to obsolescence as a result of technical and practical developments in this field. The recorded vocabulary of the Hogg brothers is peppered with these highly culturally specific terms such as “beetyach: a small knife for beeting (mending) nets” and “aave: the boy who acts as scummer (bailer) as well as the instrument he uses”. Understandably, as these tools, roles and techniques began to disappear, the words used to refer to them followed suit.

Additionally, for communities in similarly precarious cultural and linguistic situations, the disappearance of Cromarty may well reveal the truly precious nature of regional languages and dialects. The island of Tangier, set in the Chesapeake Bay, Virginia, plays host to an equally intriguing dialect. Like Cromarty, the Tangier Tidewater dialect is similarly tied to the local fishing methods and, as a result of its dramatically remote location, is hypothesized to sound similar to the English spoken by original American colonists. As such, in addition to encoding unique cultural information about the Tangier community, this dialect potentially reveals tantalizing details about the history and evolution of the English language. Understanding the sudden vulnerability and subsequent loss of Cromarty may be key in equipping communities such as Tangier with the tools and motivation to record, document or even galvanize the use of their own tongue.

Finally, the lesson of Cromarty reveals the importance of thorough documentation and archiving when dealing with highly endangered languages. In the final years of Cromarty’s use, a number of researchers (primarily Janine Donald) set about recording the dialect, as spoken by the Hogg brothers, with the hope of preserving and publicizing their unique tongue. Research findings, along with numerous original audio clips were published in an easily accessible online cultural archive named Am Baile as well as being printed in this document for local, public distribution. Since the death of Cromarty, these materials have delivered key information about the dialect’s words, phrases and sounds as well as providing fascinating cultural insight into the lives of Cromarty residents, to a truly international audience. Although these documents are by no means exhaustive, they set a great example of responsible and culturally sensitive ways to record, document and potentially preserve a language.