Review of "Bringing Our Languages Home"

Throughout the world indigenous and minority languages are losing ground and are being displaced by more dominant languages of wider communication. This trend has often resulted from historical injustices commited against indigenous peoples. But the recent times have seen the formation of a growing number of indigenous communities reclaiming their endangered or even extinct heritage languages. 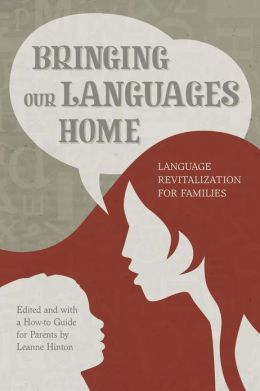 The Master-Apprentice Language Learning Program is one such initiative, pairing a proficient speaker of a given endangered language, the master, with an adult non-speaker eager to learn their heritage language, the apprentice. Developed by Leanne Hinton, professor emerita at the University of California, Berkeley, and the Advocates for Indigenous California Language Survival, this successful program has spread throughout the United States and other countries like Canada or Australia.

In her new book, Bringing Our Languages Home: Language Revitalization for Families, Hinton takes it a step further and brings language revitalization to the place where languages are really learned: the family.

The 13 case studies at the heart of the book are representative for the growing number of parents who want to enable their children to grow up with their heritage language even though they themselves might not have had this opportunity. Hinton turns the floor over to these 13 families and minority language advocates to tell their stories in their own words. The result is a book that is engaging and useful for linguists as well as anyone with an interest in the preservation and revitalization of endangered languages.

The backgrounds of the families portrayed cover a wide range - geographically as well as in the languages that are being revitalized and the context this occurs in. For some of the languages there’s still a sufficient number of native speakers to learn from. Some are being taught in immersion school programs. Other languages, as in the case of the native American Myaamia and Wampanoag, were not spoken in generations. Nevertheless, Daryl Baldwin and jessie little doe baird, who tell their stories in the first two chapters, did not shy away from this challenge, invested years of their lives to get degrees in linguistics and became experts in their respective languages. They are reaping the rewards of their efforts when they hear their children speak the language of their ancestors that had been silent for so long.

But despite the difference in initial linguistic circumstances, there’s one striking parallel in all the narratives: the constant resistance against the dominance of the ubiquitous English language. Of course, English is just a placeholder for any dominant majority language and just happens to be the national language in all the narratives (the families living in the USA, New Zealand, Ireland and Scotland respectively). But it is symbolic of the influential status of majority languages endangered languages all over the globe have to be able to compete with if they are to survive and thrive.

Bringing Our Languages Home is not just a collection of case studies but also a practical guide for families who want to venture the reclamation of their languages. The variety of starting conditions and external factors as well as the assets but also obstacles portrayed in the personal narratives give interested families a realistic impression of the revitalization of a language in the family setting. Moreover, in the final chapter Hinton sums up what we can learn from these pioneering families and complements this with hands-on tips and approaches to language revitalization for nearly any linguistic point of departure.

Leanne Hinton’s Bringing Our Languages Home: Language Revitalitation for Families is a ray of hope for even the most endangered language communities without glossing over the challenges that inevitably go with the revitalization of fragile languages in the omnipresence of established languages like English.